Sadly, my family's corporate illness caught up with me. It hit me on Monday afternoon so I was quite tired and simply chose not to go to my class that night at Fleisher Art Memorial. As such, I don't have a new painting to post this week, but tomorrow night's class will find me painting away.

I'm hoping that my week off won't affect my ability to cover the canvas like I did the previous week. I'm expecting that it'll be a bit of a challenge just from having the week off.

This past week flew by and it brought some resolution to my cold, but completely. Last night, however, my wife and I planned on going out with friends to The Melting Pot. My wife and I had eaten there before, but this was the first time our friends had been there. We got through out salads and our cheese course when suddenly the lights went out. Long story short, we stayed there for an hour before they decided they were going to close down the place. I ended up sending them an email indicating out disappointment and displeasure with the fact that:
All of the area Melting Pots were booked so we couldn't simply find another one to finish our evening out. We ended up coming back to our house and playing cards after stopping to get ice cream and some other snacks. We also watched Yeti on the Sci-Fi Channel. 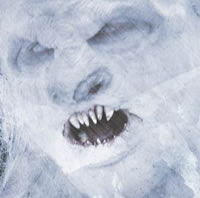 All I have to say is that you know it's bad when you're hoping the cast gets eaten!

Why did we watch the whole thing? Well, it was horrendously stupid while ALSO being incredibly funny. It's funny, that is, if you like leap-frogging abominable snow monsters who can get burned, shot and impaled but never seem to die until they're thrown off a cliff. But, there, I don't want to give TOO much away in case you plan on watching it.

Let me just leave you with this additional tidbit ... one of the main characters gets both his legs broken, uses one of his dead friend's forearms as a splint, walks through knee-high snow drifts and then, later, tumbles down a hill while trying to escape the yeti only to have another friend shoot him in the eye with a flare gun after arriving back at camp. BUT, he turns out NOT to be dead -- which you don't find out until the end of the movie when he crawls disoriented from the hold of the aircraft that had been pushed off of a CLIFF by a yeti.

Fortunately, though, we need not fear that that guy's character will further pollute the gene pool because the hand of one of the yetis that had been IMPALED by stakes and covered by tons of snow from an avalanche thrusts his three-digit hand through the snow ominously ending this horrendously stupid horror movie. (Hey, I got to use my description again!)

So I guess one can't complain about spending time with your spouse and good friends even if that means an insipid movie sucks you in and leaves you laughing as its foolishness, right?
at November 09, 2008
Email ThisBlogThis!Share to TwitterShare to FacebookShare to Pinterest
Labels: a la prima painting, dinner out with friends, Fleisher, Sci-Fi Channel, The Melting Pot, water-soluable oil paints, Yeti 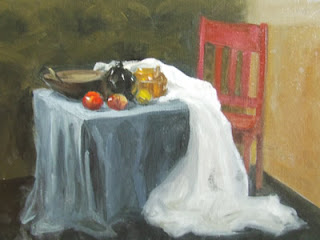 Ok, here's the painting I completed last Monday during my a la prima still life class. As I indicated in my last post, I completed the entire painting. Of course, it's not all as developed as it should be. But, I was happy that I covered the whole canvas. I kinda pulled it together during the eleventh hour, I guess you could say.

For those of you new to my blog, I'm taking an a la prima painting class. Each painting for the class must be completed within the three hour class period. It's been a challenging process; learning to paint in one sitting. There are many pieces that need to be brought together to make it happen at all, let alone successfully. LOL!

There are obvious components that I'm not happy with. The chair is slightly off on the top left of the chair back. I can't believe I missed that. There are some tonal variations with the chair as well that could make it appear more solidified. The spatial relationships between the area directly behind the table and those peripheral elements (i.e., chair, end of black platform the table and chair are on). I am also wanting to work on rendering drapery to appear more solid.

Oh, and by the way, my 2-year old is responsible for the finger prints and occasional smudges. I shouldn't have had it where it was, but she picked it up and moved it. In the process, she put dark marks on the white canvas drape and smudged a couple of other areas. No biggie though.

I'd like to try, at some point, toning the background so it melts into the gray value I have been using for this class. Then with that established I can pull out the more saturated values of the focal point.