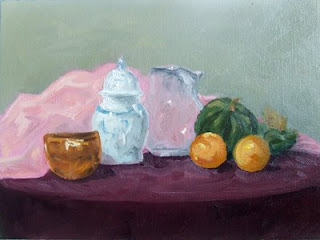 That Pink Thing was the last alla prima oil painting I did for my still life class I started in October. I have to say this was also one of the paintings I liked least from my class. While I liked the composition and a few of the components (e.g., the tablecloth and acorn squash, in particular), I made poor choices in the execution of this piece.

I zoomed in some on the objects versus working smaller including more of the space surrounding the piece. While the colors harmonized overall, my application of the copper bowl wasn't as successful as I had done previously (e.g., It's Not Easy Being Blue and Fruit with Vessels. I'm probably reacting to the softness of the edge which makes the bowl feel more ceramic than metal. The white vessel next to the copper bowl proved the most disappointing because I screwed up the perspective of the blue stripe. I may go back and simply paint over the area to make the stripe nonexistent; you know, blend it in more. We'll see. Oh, and did I mention "that pink thing" in the back drove me nuts because I simply hated it. I'm sure most of my disdain stems from my not doing fabric well. But, as I posted previously, I'm going to make that something to work on in 2009.

It saddened me to realize that the new art classes will be starting at Fleisher in another couple of weeks. I had considered signing up again with Giovanni Casadei, but decided to hold off and do some work on my own at home. I am reviewing my goals for this year and I'll probably post something related to that as I've become more intentional about those musings as of late.

On a final note, I will do a better job at photographing my work. Susan Martin Spar over at her art blog The Daily Muse recommended that I include close-ups of the surface to highlight my brushwork. I'll be more diligent with either doing such close-ups or making certain that when you click on the painting itself the enlargement sufficiently displays the surface texture. Thanks for your recommendation Susan!
at January 12, 2009
Email ThisBlogThis!Share to TwitterShare to FacebookShare to Pinterest
Labels: alla prima oil painting, oil painting, water soluble oil paints
Newer Post Older Post Home