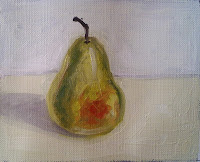 Here is the third in a series of still life demonstrations that I did for my students in Introduction to Painting, my alla prima painting class. Unlike Apple, I was able to complete this painting in the 15-20 minutes I allotted for my demo.

The three students who sat in on this demonstration saw the key point I have been reminding all of my students of from the beginning of this course. Namely, alla prima is meant to be immediate--it's direct painting. Most of my students struggle with over mixing, over blending and, generally, over doing it. That often translates into muddy colors and edges that are too sharp.

This particular fruit example was made particularly challenging for two reasons: there were two green, speckled "stripes" running down either side and two splashes of orangy-red on the other two sides. I showed them that this was merely an opportunity for alla prima to shine. I could have done the green "stripe" a bit more speckled with a broken line effect but I opted to focus more on the blending between the green and yellow underneath. The splashy orangy-red was more easy to achieve and gave my students what they needed seeing the blending happen in front of them.

For those particular students, it was important for them to see the blending happen in front of them. Surprisingly, this wasn't the first time they saw it but it helped two of the three with what they delivered in their own rendering of this composition.
at May 04, 2009
Email ThisBlogThis!Share to TwitterShare to FacebookShare to Pinterest
Labels: a la prima oil painting, alla prima oil painting, black and white still life, water soluble oil paints, water-mixable oil paints, water-soluable oil paints
Newer Post Older Post Home